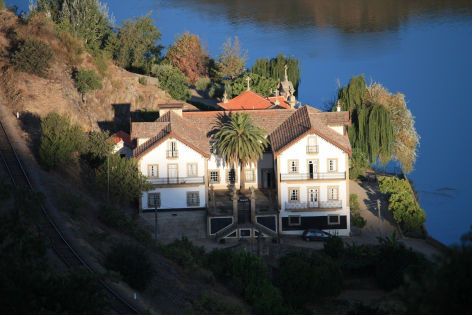 The Portuguese word Quinta means country estate or winery and is used, as everywhere in the country, also at the Douro. What one has to imagine under a Quinta, ranges from a larger garden arbor up to stately country houses with various outbuildings. The area of a Quinta can be from a few to several hundred hectares. Rarely, however, everything is planted with vines; often, one finds citrus trees, almonds and olives. Some old vineyards also lie fallow, mostly since the phylloxera disaster.
On many of the 84,000 vineyards in the Douro, the 30,000 registered winegrowers produce table wine and no port. And those who produce port often deliver the grapes, the must or the finished port to the cooperatives and shippers.
However, some wineries have sites that produce excellent port. These Quintas, some of whose wines are also marketed as Single Quinta Vintages, are comparable to the great Bordeaux Chateaux with their characteristic wines. Almost all of these quintas have long-term contracts with one of the big port wine houses or have been bought by them in the meantime.
Such a Quinta - and this is what we are talking about here - consists of at least three buildings (parts):

The Adega (Portuguese: wine cellar) with the Lagars, in which the harvested grapes are stomped and fermented until stopped by the addition of wine distillate.
The Armazém (Portuguese: warehouse), which is usually lower than the Adega and houses a barrel store.
The living area, which often lies above the Armazém to keep it as cool as possible.

Other buildings or parts of buildings can be accommodation for seasonal workers and visitors. There are also stables and other agricultural buildings.