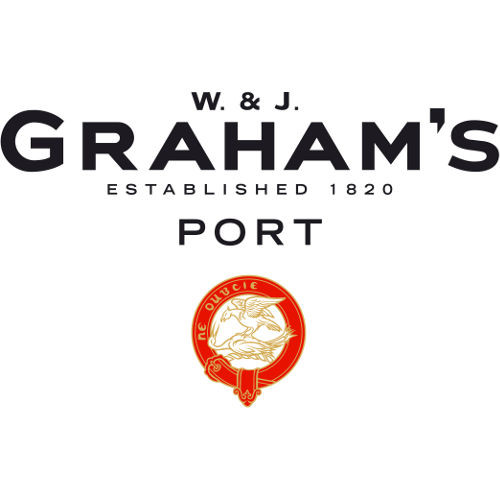 A house with a legendary history: Actually active in the textile industry, the Graham brothers accepted some Pipes Port as payment of outstanding debts. Since the sale of the barrels was quite positive, William and John decided to enter the port wine trade. When Andrew James Symington came to Porto in 1882, he ended up with the Grahams and became interested in port wine. He was also said to have played a decisive role in Graham's buying the Quinta dos Malvedos in 1890, now led by the descendants of the founders. A friendly relationship had developed between the families. In 1970 the Grahams then sold the company of the same name and the subsidiary Smith & Woodhouse to the Symingtons - interestingly without the Quinta dos Malvedos, which was only taken over in 1982 by the meanwhile most important port wine producers.
With the 1998 harvest, Graham's announced a revolution in port wine production: A self-developed, fully automatic and computer-controlled Lagar was ceremoniously inaugurated. It should not only be on a par with the traditional stone lagar - in which the grapes are trampled on with their feet - but even superior. - In the meantime the Robotic-Lagares are not only established on Malvedos, but also on many other goods.

The wines for the Graham's Ports come from their own Quinta dos Malvedos (near Tua), the Quinta da Vila Velha (between Tua and Pinhão) and estates in the Rio Torto valley, some of which have been supplying since the early 20th century.
Graham's Ports are known for their distinctive style: with great sweetness and concentrated, ripe fruit, they also have a strong backbone of tannins. The Vintage Ports, of which - if declared - 15 to 20 thousand twelve-boxes are produced (since a quality offensive in 2011 it has been 5 to 7,000 boxes), are undoubtedly part of the cream of the market. For the first time with the 2011 vintage, a strongly limited premium vintage port was also launched: Graham's Stone Terraces. But the Late Bottled Vintages and the vintage blends, such as the Six Grapes, can also regularly hold their own in comparative tests.
(Translated with www.DeepL.com/Translator)